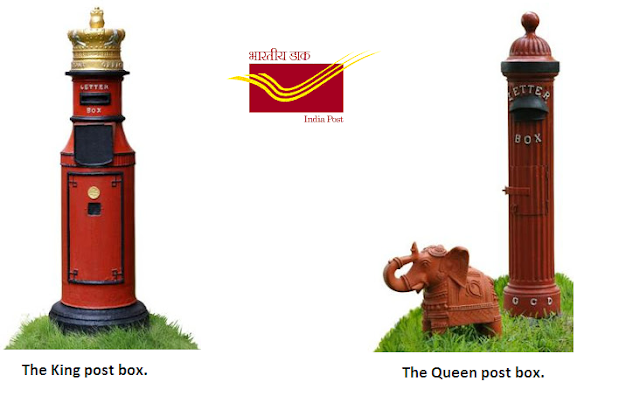 HOW MANY ARE AWARE THAT ON WAY TO MADURAI AIRPORT, THERE STANDS A LESSER KNOWN MUSEUM AS A REMINDER OF THE DEEP AND RICH HISTORY OF THE INDIAN POSTAL SERVICES?

Now this could well be a GK question! Where is the highest post office in the world located? The answer is: In small town of Hikkim, in Lahaul Spiti district of Himachal Pradesh at a height of 15,500 feet.
To know this fact may or may not excite you. But what surely will is to see an envelope from this post office with its seal sent to the Director Postal Training Centre (PTC), Madurai, a decade-and-a-half ago. Would it not be fascinating to learn about the North to South journey of the written words and also experience in spirit how letters travel and how they are delivered?
As I sit with V.S.Jayasankar, the present Director of PTC in Madurai, he tells about many more such items of antiquity and heritage value that not only teach and inspire but also show how our postal services touched the lives of so many people all over the world for centuries.
In these times of instant messaging and whatsapp, letter writing and stamp collection may put people off as dry academics and a visit to postal museums may not be high on priority in their to-do lists.
“But unless you choose to step into the world of mail and philately,” Jayasankar asks, “how will you know about the treasures it is filled with?”
So to mark the National Postal Week celebrations from October 9 to 15 starting with World Postal Day today (Friday), he invites the public – especially students – to visit the little postal museum inside the PTC premises in Perungudi. It has on display exhibits from 18th Century and beyond.
Unknown to the public, the museum was in existence ever since the PTC came up in 1981. But it was only in 2010, when T.Nirmala Devi came as the Director that the museum got a facelift. Till then it was more like a storehouse dumped with the letter-boxes of yore, instruments and records of the department.
“We tend to ignore our past in the name of development and modernisation and convenience,” rues Nirmala, now posted as Director of Posts, Southern Region. She took it upon herself the responsibility of preserving the past and went about beautifying the not-so-well maintained campus first. It was cleared of snakes, the lawns were mowed and greened with shade giving and flowering trees and dotted with terracotta horse and pots.
The heavy iron letter boxes belonging to the period of King George V (1865-1936) and those with postal markings of Travancore (1861-1950) were taken out, cleaned, painted and installed in the garden.
People have to know about a system of communication that has stood the test of time,” says Jayasankar, her husband, who took over charge from her in 2014. “These exhibits are an undeniable part of us and our heritage. Unfortunately, they did not get the importance they deserve,” adds Nirmala.
In these last five years, the couple has developed the 1,000 sq ft area inside the PTC by putting together a host of paraphernalia associated with runners and mailman of a bygone era besides an impressive philatelic collection that charts the history and development of the Indian postal system. The museum takes you through glass shelves, racks and boxes that neatly hold several objects and tools used by postal staff over the years and laminated sheets of order books dating back to 1880.
“We await more visitors now for this journey, says Jayasankar. “With this, people will be able to understand that the postal department does not ferry just mails but also carries the emotions of the people served,” adds Nirmala.
Together, they are trying to make the postal museum a new hotspot in the city because, “a Postal Museum is much more than just looking at exhibits,” says the couple. “It is our legacy.” 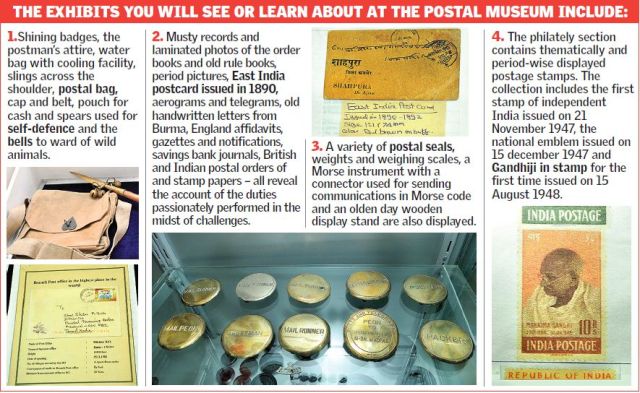 Quotes:
“There is plenty of history in stamps and other philatelic material. The Madurai Postal Museum aims to showcase important facets of our history. Much can be learnt about our work culture also by browsing through the documents on display here. We want our younger generation to come and explore this history with us and enrich their minds.” – V.S.Jayasankar, Director Postal Training Centre, Madurai.
“The postal museum contains several exhibits that offer valuable insight into not only the postal operations but also of socio-economic conditions of those days. The work of reviving the postal museum was taken up with the sole intention of making the existence of these priceless documents made known to the younger generation”. – T.Nirmala Devi, Director of Posts, Southern Region, Tamil Nadu Circle.
Other postal museums in the country:
Postal museums located inside similar Postal Training Centres in the country are at Vadodara, Darbhanga, Sahranpur, Mysore and Guwahati.
Courtesy : http://www.thehindu.com/features/metroplus/society/post-from-the-past/article7738804.ece
Courtesy : AIPEU, Group-C, Bhubaneswar, Odisha
Posted by AMULYA KUMAR MISHRA at 11:53 PM