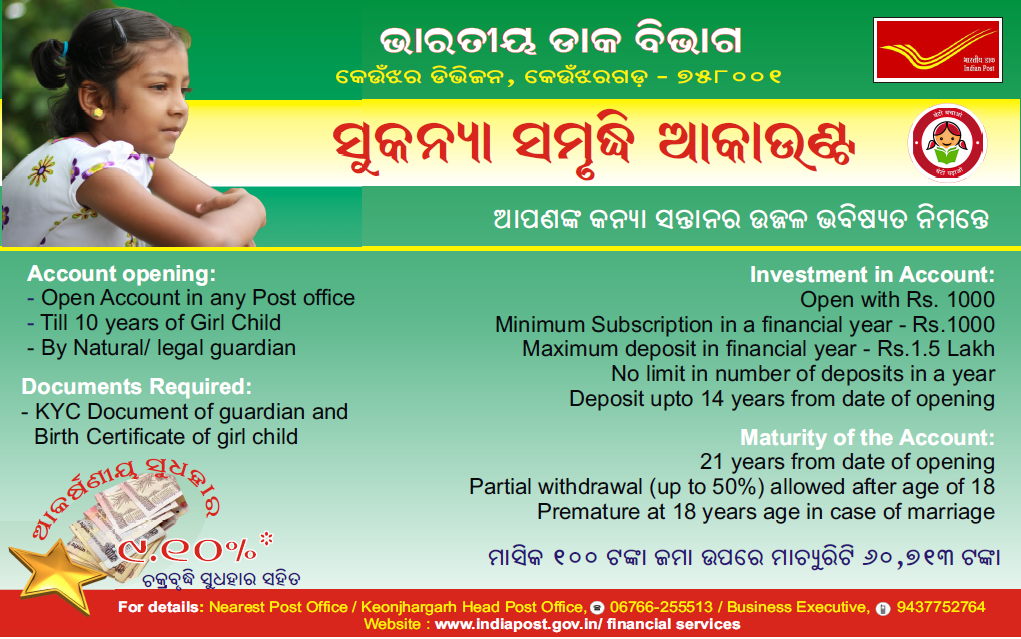 Posted by AMULYA KUMAR MISHRA at 7:03 AM No comments:

MAKE THE 28th APRIL -2015 PARLIAMENT MARCH
ON THE CALL OF NATIONAL COUNCIL JCM
A HISTORIC SUCCESS.

The Central Government is reluctant to settle the justified and genuine demands of Central Government employees i.e. 100% D.A. merger, 25% Interim Relief, Inclusion of GDS in 7th CPC , Date of Effect 1.1.2014 , Scrapping of New Pension Scheme , filing up of vacant  posts, in all Department’s , withdrawal of contractrization  and out sourcing  policy, removal of 5% ceiling on compassionate  appointments, Removal of MACP related  anomalies , Revision of OTA Rates  including some other demands.

Joint Consultative Machinery which was formed for the redressal of grievances of Central Government Employees by negotiations has been made defunct and no meeting has been held after 2010. After constitution of 7th CPC the views of Staff Side N.C. JCM has not been taken into account. The Terms of Reference of 7th CPC were declared unilaterally and agreed draft of Terms of Reference submitted by Staff Side was not given cognizance. The Minister in P.M.O. Shri Jitendra Singh replied in response to the question raised by some MPs that Government is not going to grant 100% or 50%  D.A. Merger , 25%  Interim Relief and inclusion of GDS in 7th CPC.

In the back ground of all these developments a National Convention of all constituents of National Council JCM was convened in New Delhi on 11th December-2014. All the participants’ organizations vehemently opposed the policies of Central Government.

After detailed deliberations it was decided that a massive Parliament March will be organized in New Delhi on 28th April-2015 in which the date of Indefinite Strike will be declared. Intensive preparation campaign is going on. NJCA was formed at National level in which the top leaders of AIRF, NFIR, AIDEF, NDWF, Confederation, NFPE and FNPO are included. State JCAs have been formed in most of the circles and State conventions have also been held and wherever it has not been formed the state leadership has been asked to complete this work very soon.

It has been decided to mobilize 100000 one lakh Central Government Employees to participate in Parliament March. Quota has been fixed as 50000 for Railways, 30000 for Defence and 30000 for Confederation. Confederation has allotted quota to NFPE as 10000. Accordingly NFPE has also allotted quota to each affiliated union. Comrades, as we know that whatever we have achieved that is because of struggles only. The present government is functioning to give maximum benefit to the corporates and capitalists. It is not at all concerned about the working class. It started disinvestment in PSUs, Declared 100% FDI in Railway and 49 % FDI in Defence. The recommendations of Task Force Committee headed by TSR Subramaniam .are big danger for Deptt of Post which has paved the way of privatization through Corporatization.

Confederation of C.G.E&W and NFPE have given separate programmes of agitation which should be observed with great enthusiasm.

NFPE calls upon the entire Postal, RMS  and GDS employees to make all the programmes a grand success and mobilize the maximum number employees, more than the quota allotted to each affiliated union to take part in  the Parliament March  on 28th April-2015 on call of National Council JCM to make it a historic success.

Posted by AMULYA KUMAR MISHRA at 7:01 AM No comments:

SMALL SAVINGS SCHEME AT A GLANCE 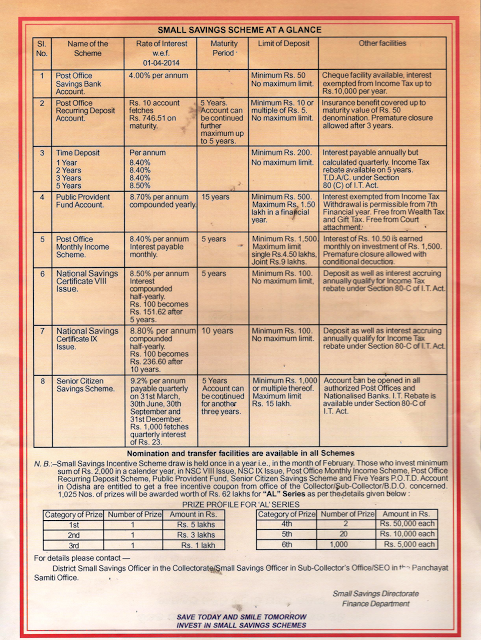 Posted by AMULYA KUMAR MISHRA at 7:00 AM No comments:

DEPARTMENT’S DELAYING TACTICS SHOULD NOT BE ALLOWED. POSTAL JCA SHOULD NOT FAIL IN ITS RESPONSIBILITY.

COM. M.KRISHNAN
EX SECRETARY GENERAL NFPE
Cadre Restructuring agreement of the Group ‘C’ employees of the Department of Posts was signed by both the official side and staff side on 28.04.2014 after protracted discussions and hard-bargaining by the leadership of NFPE & FNPO. By 30.04.2015 first anniversary of the signing of the agreement will be over. Even after a lapse of nine months the proposal is still pending in the Postal Directorate. In all other departments like Railways, Income Tax, Central Secretariat etc. cadre.

restructuring is already approved by Government and implemented. Employees got the benefits months back. Postal JCA has included this demand in its charter of demands. The reply given by the Department is really shocking and shameful. After keeping the file in the cold-storage for ten months now the Postal Board says it want six months more time to process the proposal for submission to the DOP&T. Reply given by the Department in the minutes of the strike charter discussion is reproduced below:
“The examination of proposals regarding Cadre Restructuring will be expedited and will be sent to DOP&T within specified period as decided in the JCM meeting (i.e six month from 16.12.2014)”
So, as per the reply, for processing the proposal, the Directorate will take time upto 30.06.2015 i.e. fourteen months from the date of signing of the agreement. It is really shameful. After processing, the proposal is to be submitted to DOP&T for approval. If Postal Board can take 14 months for  processing, DOP&T will definitely take minimum six months. After that approval of Finance and Law Ministry’s are to be obtained. Thus minimum it will take one more year from 30.06.2015. By that time 7th CPC report will be submitted and implemented by Government. Once 7th CPC   recommendations are implemented the entire cadre Restructuring Agreement signed after 6th CPC report will become infructuous and Government will say fresh cadre Restructuring Committee is to be constituted after the 7th CPC. That means all the effort made by the Postal Federations will go in vain. This should not be allowed to happen under any circumstances. Postal JCA Leaders should rise upto the occasion.
All of us know that the cadre Restructuring agreement is a product of continuous struggle conducted by Postal JCA right from 2010 onwards. Postal Board adopted delaying tactics from the very beginning and everytime we countered it with serious agitations including serving of indefinite strike notice and mobilisation of the workers, which compelled the Postal Board to sign the agreement on 28.04.2014. If the agreement is implemented, the promotional chances of Group ‘C’ employees will increase three fold (three times). Further on completion of two years service in the third promotional scale they will get one more promotion i.e. fourth promotion. Every Group ‘C’ employee will be benefited and the long wait for getting more promotional opportunities will be over.
In the above circumstances, we cannot accept the stand taken by the Postal Board in the JCM Departmental council meeting on 16.12.2014 and also in the strike Charter discussion meeting on 05.02.2015. 6th & 7th Central Pay Commissions are given only 18 months time by the  Government for examining the wages and service conditions and giving  recommendations regarding 30 lakhs of Central Govt. employees and about 20 lakhs Defence personnel which includes more than 60 departments and hundreds of various cadres and Pay Commissions are completing their work within the specified time. Here in the Postal department for processing an agreement signed by the Department and staff side 14 months time is being taken, that too not for final orders, but for submitting the proposal to DOP&T!!!. It is an insult to the entire employees who are eagerly waiting for orders. Their hope and aspirations cannot be allowed to be shattered, because of the indifferent attitude of the Postal Board.
Postal JCA leaders should take a firm and uncompromising stand and should demand implementation of the cadre restructuring proposals (not merely processing for submission to DOP&T) before 30.04.2015. Orders are to be issued before 30.04.2015. Otherwise we should go for indefinite strike as already decided by Postal JCA.
It is an agreement signed by the Department and it should not be allowed to lapse automatically after 7th CPC finalizing its report. DOP&T will not allow any cadre restructuring Committee Report constituted after 6th CPC to be implemented after 7th CPC recommendations. Once 7th CPC  recommendations are submitted to Government, DOP&T will simply reject the agreement and advise Postal Board to reconstitute another Cadre Restructuring committee after implementation of 7th CPC recommendations. So let us understand the seriousness of the situation and rise upto the occasion.
Posted by AMULYA KUMAR MISHRA at 6:10 AM No comments:

7th PAY COMMISSION INVITED NATIONAL COUNCIL JCM/STAFF SIDE FOR A MEETING ON 25.02.2015 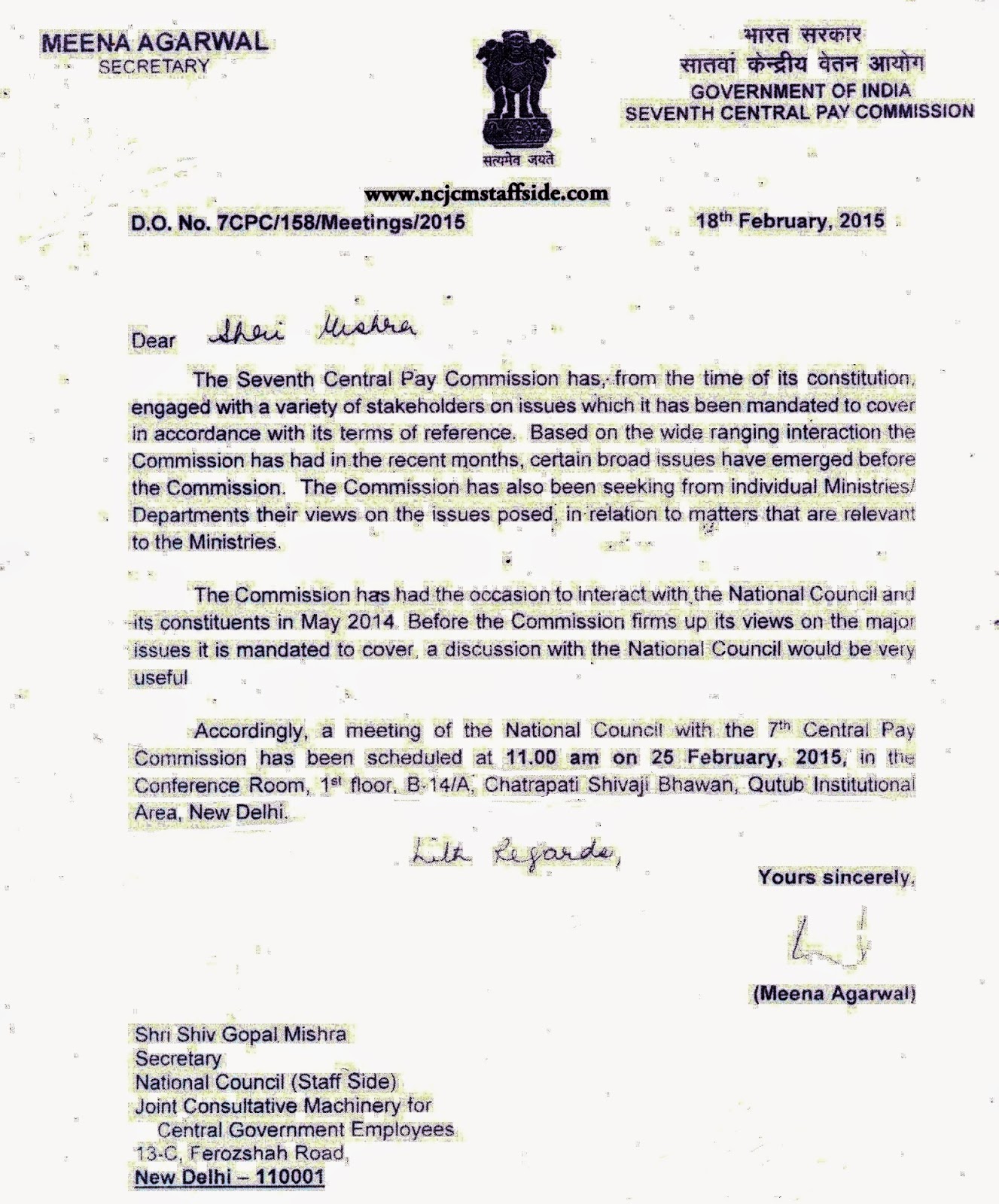 Posted by AMULYA KUMAR MISHRA at 6:09 AM No comments: 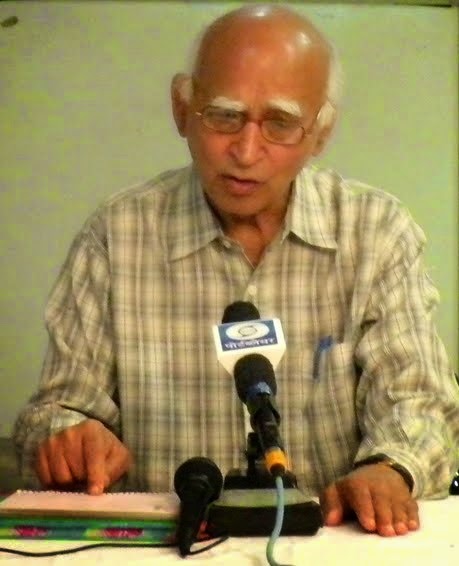 To: PMG Behrampur Region; PMG Sambalpur Region; adtech-bmp.dop; Phulbani DO; Koraput DO; Kalahandi DO; Aska DO; Sundargarh DO; Sambalpur DO; Keonjhar DO; Dhenkanal DO; Bolangir DO; Mayurbhanj DO; Bhadrak DO; Balasore DO; Cuttack South DO; Cuttack City DO; Cuttack North DO; Bhubaneswar DO; Puri DO; Berhampur DO

A number of phone calls have been received by this office about problem in different sectors in Sanchay Post (especially in C Class P.Os where Sanchay Post is being installed newly) and about “Collation” Conflict while running “Consolidated Report” in DB Analyser as well Data Migration (Mock & Go Live).

In this connection I am directed to intimate the following for information and necessary action and to bring this to the notice of all concerned.

Further, if there exists “Collation” Conflict in Default PO Name Table, “Consolidated Report” in DB Analyser will not run.  Please rectify the same.

At the same time, if there exists “Collation” Conflict in any table in “Post” and “MDE” Database, neither mock migration nor Go Live migration will happen.  The concerned tool will exit throwing error message.  To remove the conflict, “click on Restore Default” in the table design to restore the database default.

Hence I am further directed to request to bring this to the notice of all concerned (especially officials involved in discrepancy settlement & migration) and advise them to check the databases at S.Os and rectify the “Collation” Conflict for smooth settlement of discrepancy and smooth data migration.

*** For creating database in Backup Server for migration (mock & Go Live) no need of installing from Sanchay Post 6.5 for New Sites.  Database may be created in Sanchay Post 7.5, as on restoring the DBs, the upgraded DB will come automatically.