If unions are not engaged in talks, another strike will follow: Dasgupta 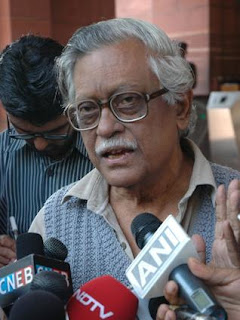 The two-day strike by the Central trade unions against the government’s “apathy” towards the working class came up in the Lok Sabha on Friday, with some members warning that there could be another agitation if trade unions are not engaged in talks.
Raising the issue during zero hour, Gurudas Dasgupta (CPI), who is also leader of the All-India Trade Union Congress (AITUC), said 44 crore workers, who were the mainstay of production in the country, were not getting appropriate remuneration and the government was neglecting them.
Referring to the two-day strike, he said the trade unions did not want to resort to such actions but were forced to do so by the government. Prime Minister Manmohan Singh made an “innocent appeal through press” for talks. “The Prime Minister offers talks to trade unions through the press. Does he talk to the corporates also through the press?”
Mr. Dasgupta said the Prime Minister had formed a committee of four Ministers to talk to trade union leaders, but in the meeting that took place, Finance Minister P. Chidambaram was not present. Labour Minister Mallikarjuna Kharge also called trade union leaders for talks, but he had “nothing to offer.”
Mr. Dasgupta warned that if the government did not engage with trade unions, there would be another nationwide strike.
CPI(M) leader Basudeb Acharia and Janata Dal (United) chief Sharad Yadav associated themselves with Mr. Dasgupta’s views.
“Strike a success”
Meanwhile, the Left parties have congratulated the working class, employees and other sections of the working people who made the two-day general strike a “magnificent success.”
“The workers struck work in all industries and commercial sectors. The strike was effective in the petroleum, coal, mining, port and dock, banking and insurance sectors. State government offices were also affected by the strike. The participation of workers in the unorganised sectors was also notable,” a statement issued by the Left parties here said.
“The Central government has to immediately address the demands raised by the general strike and take steps to fulfil them, otherwise bigger actions will follow. This is a wake-up call to the government to stop the anti-people and anti-working class policies,” said the statement issued jointly by Prakash Karat, general secretary of Communist Party of India (Marxist); S. Sudhakar Reddy, general secretary, Communist Party of India; Debabrata Biswas, general secretary of the All India Forward Bloc; and T.J. Chandrachoodan, general secretary of the Revolutionary Socialist Party.
Source : The Hindu, 23, Feb, 2013
Posted by AMULYA KUMAR MISHRA at 6:10 AM