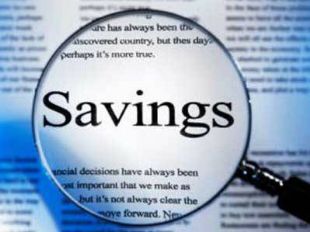 NEW DELHI: You can expect your provident fund savings to earn better returns from 2013-14, though small savings instruments like national savings certificates will deliver lower returns from April 1.


The Employees' Provident Fund Organisation (EPFO) will adopt a new investment pattern from the coming financial year, junking its archaic investment norms that have remained unchanged since 2003 and have been blamed for the falling returns on EPF savings in the last two years.
In 2011-12, over Rs 6 crore EPF members were paid 8.25% on their retirement savings. For 2012-13, a return of 8.5% has been declared though the finance ministry is yet to ratify the payout.
By contrast, PPF savings earned 8.8% this year and will earn 8.7% in 2013-14. The labour ministry has decided to modify EPFO's investment norms to boost returns on its Rs 5,00,000 crore corpus and stave off persistent criticism from stakeholders and the finance ministry over EPF returns being lower than high inflationrates and the comparable returns of 10%-14% offered by the New Pension Scheme run by the Pension Fund Regulatory and Development Authority.
The EPFO was hurtling into an investment crisis and its income was expected to fall to 8% by 2017-18, if it had maintained status quo. Though its corpus has been increasing, EPFO's investment avenues haven't grown, even as it faces increased competition from foreign institutional investors and domestic financial institutions in the bond market.
Under the new norms, EPFO can invest its corpus in bonds issued by eight new blue chip private sector firms such as Reliance IndustriesBSE -1.24 % and Larsen and ToubroBSE 2.09 %. Eight more firms, which include Tata Consultancy Services, Infosys Technologies, WiproBSE 0.31 % and Ambuja CementsBSE 2.85 %, could also qualify for fresh bond investments. 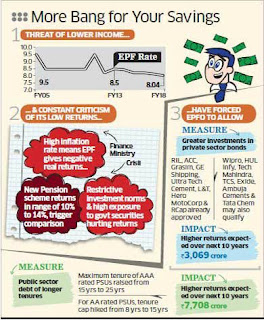 This will significantly expand the universe of private firms that EPFO can invest in, which currently only includes seven firms — HDFCBSE 0.38 % Bank, LIC Housing FinanceBSE 1.63 %, ICICI BankBSE 2.37 %, Infrastructure Leasing and Finance Services LtdBSE 0.00 %, Axis BankBSE 0.53 %, HDFC and IDFCBSE 2.79 %.
To improve its returns from PSUs bonds, the EPFO has changed the tenure limits for such securities so that it can lock into better returns for a longer period. The maximum tenure for AAA-rated PSUs has been raised from 15 years to 25 Years, and from 8 years to 15 Years for AA-rated PSUs. AAA ratings denote the highest level of safety for bond investments.
Rating agency Crisil reckons that changes in norms for private sector firms' bonds would boost EPF earnings by over Rs 3,000 crore in next 10 years. Similarly, allowing longer-term investments in public sector bonds would boost its income by over Rs 7,700 crore over the next decade.
Income from plain vanilla government bonds would also go up, as the PF office will now be able to deploy upto 55% of its fresh inflows into state government bonds that deliver higher returns than central government securities, where 70% of its annual corpus is currently parked. Nearly 90% of EPFO's private bond investments were concentrated in banks, as on December 2012.
Even among public sector bonds, banks accounted for 53% of EPFO investments while other firms accounted for just 35%. With new bond issuances from public sector firms being limited, it has been forced to park money in banks' term deposits.
The RBI's implementation of Basel III capital regulations also creates the problem that new bond issues from banks will have an equity convertibility clause. The EPFO has steadfastly opposed equity investments, though finance ministry has opened the stock market window for PFs since 2005.
Source :http://economictimes.indiatimes.com, 30 March, 2013
Posted by AMULYA KUMAR MISHRA at 7:04 AM