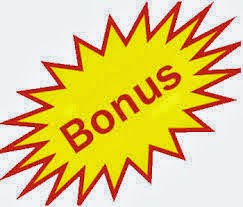 File No. 26-04/2013-PAP
Government of India
Ministry of Communications& IT
Department of Posts
(Establishment Division)

The maximum ad-hoc Bonus will be calculated as below:-

Accordingly , the rate of Bonus per day will work out as indicated below:_

Maximum ad-hoc Bonus for the year
365

5. The amount of Bonus /Ex gratia payment /Adhoc Bonus payable under this order will be rounded to the nearest rupee. The payment of Productivity Linked Bonus as well as the ex-gratia payment and ad-hoc payment will be chargeable to the Head `Salaries` under the relevant Sub –Head of account to which the pay and allowances of the staff are debited. The payment will be met from the sanctioned grant for the year 2013-2014.

6. After payment, the total expenditure incurred and the number of employees paid may be ascertained from all units by Circles and consolidated figures be intimated to the Budget Section of the Department of Posts. The Budget Section will furnish consolidated information to PAP Section about the total amount of Bonus paid and the total number of employees (category-wise) to whom it was distributed for the Department as a whole.

7. This issue with the concurrence of Integrated Finance Wing vide their diary No. 156/FA/13/CS dated .4th October, 2013
8. Receipt of this letter may be acknowledged