The PJCA had reviewed the progress on the reply given by the department on the items of Strike Charter of Demands in the meeting held on 5.2.2015 in Dak Bhawan, New Delhi. Even though the progress is not satisfactory, the reply on some of the items in the earlier Charter of demands is accepted. PJCA has recorded disagreement on the remaining items and hence we are submitting herewith the revised charter of demands containing 26 demands which is enclosed herewith.
DA: Revised Charter of Demands
Yours faithfully,

1.  No Corporatization and privatization in Postal Services.

2. Inclusion of Gramin Dak Sevaks (GDS) in the terms of reference of Seventh Central Pay   Commission. Grant of Civil Servant status to GDS and grant of all benefits of departmental employees on pro-rata basis without any discrimination.

3.  Regularise the services of Casual, Parttime, Contingent Employees and Remove the cut off date

6.  Scrap the New Pension Scheme (NPS) and include all employees recruited on or after 01.01.2004 under the old statutory pension scheme.

8.  Fill up all vacant posts in all cadres including drivers Artisans , Assistant Managers, Managers and Senior Managers in MMS & GDS.
(a)    By direct recruitment
(b)   By holding DPC and granting promotions
(c)    By conducting departmental promotional examination.
(d) Replace all condemned vehicles in MMS

9. Implement cadre restructuring in Postal, RMS, MMS and Postal Accounts as per the proposal signed with the JCM (DC) staff side.
10 . Settle issues relating to Postmaster Cadre officials.
(a)    Allow to write IP and PS Group ‘B’ examinations
(b)   Relaxation in service conditions for promotion from one grade to another, at par with general line promotions to identical posts.
(c)    Filling up of all PS Group ‘B’, PM Grade III and Grade II posts by eligible officials and till that time adhoc-promotion may be granted.
(d)   Other related issues such as filling up of 100% senior Postmaster/Chief Postmaster posts earmarked for PM cadre by PM cadre officials alone and maintainance of Circle Gradation list etc.

(a)    Replace out dated computers and peripherals with new ones.
(b)   Increase network capabilities and Bandwidth.
(c)    Set right the Users credential problems in leave arrangements etc.
(d)   Stop hasty “Go live” of CBS, CIS till cleansing of data pucca.
(e)    Provide all assistance and stop harassment in the Implementation of CBS & CIS
(f)      Grant enhanced financial powers to Head Postmasters
15. Prompt and regular holding of JCM, Departmental Council meeting, Periodical meeting with Secretary Department of Posts, Sports Board meeting and Welfare Board meeting. Ensure representation of recognised Federations in Sports Board and Welfare Board by calling for nominations.

16. Ensure full protection of existing allowance (TRCA) of GDS employees and introduce Medical Reimbursement Scheme to GDS. Existing monthly emoluments (TRCA) drawn by the GDS should not be reduced under any circumstances. Revision of cash handling norms.

17. (a)   All Circle offices/Regional offices/DPLI office, Kolkata must be allowed to function as Circle Processing Centres (CPCs) while implementing Core Insurance Solutions (CIS) through McCamish for steady growth of PLI/RPLI Business
(b) Stop diversion of 615 posts (576 posts of PAs from C.O.s and 39 posts of PAs from APS PLI CELL) ordered vide Department of Posts, Establishment Division No. 43-47/2013-PE-II dated the 9th June, 2014.
(c)   Stop harassment and victimization of staff of Circle Administrative offices
in the name of decentralization of PLI/RPLI.

19. Make substitute arrangement in all vacant Postmen/ Mail Guard and MTS Posts. Wherever GDS are not available, outsiders should be allowed to work as substitutes.

20. Modify the orders dated 22/5/1979 regarding existing time factor given for delivery of articles taking in to account the actual time required for door to door delivery.

22. Powers for writing APARs of SBCO staff may be delegated to AO (SBCO) instead of Divisional heads and stop imposing the work of SB Branch on SBCO.

25. Review of marks of JAO (P) Part-II examination held in December 2012 in r/o SC/ST candidates. As the exam was conducted on the basis of old Recruitment Rules i.e JAO and the said posts are Group ‘B’ (Non-Gazetted) review may be held. 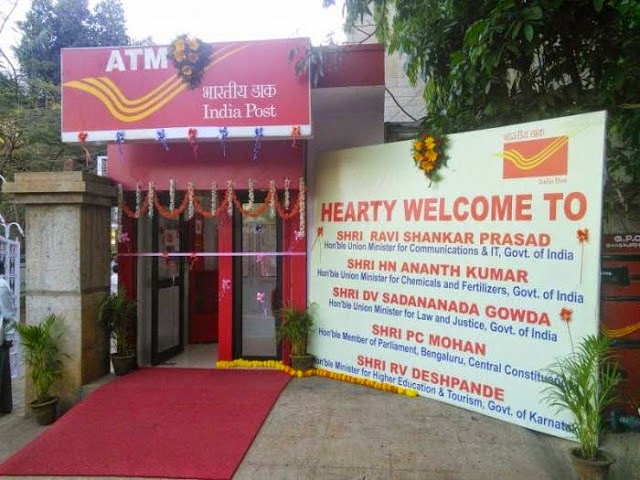 Union Minister for Communications and IT Shri Ravi Shankar Prasad on April 2, inaugurated the first ATM at Department of Posts, in General Post Office premises, Bangalore. It is the first an ATM will go live in Karnataka Postal Circle.

Speaking on the occasion, Minister Ravi Shankar Prasad said the need of the hour was for the Department of Posts to think a little out of box. “The Department of Posts should be ready to meet the three benchmarks – ensuring delivery of letters (post), money orders and parcels on time. It has to utilise its wide network for better performance and revenue,’’ Prasad said.

Praising MS Ramanujam, chief post master general, for taking measures to provide an ATM and other services in Karnataka Postal Circle, the minister said that the Department of Posts should make an attempt to increase revenue. “You have done a good job of associating with Department of Tourism which has agreed to find a sponsor for maintaining the heritage building of Postal Department on Museum Road,’’ he said.
The following are features of the ATM service:

Posted by AMULYA KUMAR MISHRA at 8:27 AM