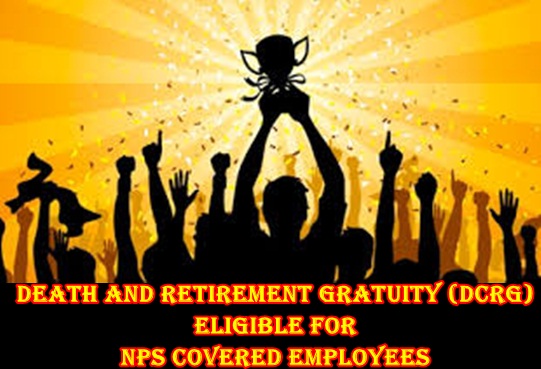 No.7/5/2012-P&PW(F)/BMinistry of Personnel, Public Grievances and PensionsDepartment of Pension and Pensioners Welfare

The undersigned is directed to say that the pension of the Government servants appointed on or after 1.1.2004 is regulated by the new Defined Contribution Pension System (known as National Pension System), notified by the Ministry of Finance (Department of Economic Affairs) vide their OM No.5/7/2003-ECB & PR dated 22.12.2003. Orders were issued for payment of gratuity on provisional basis in respect of employees covered under National Pension System on their retirement from Government service on invalidation or death in service, vide this Department’s OM No.38/41/2006-P&PW(A) dated 5.5.2009.

4. In their application to the persons belonging to the Indian Audit and Accounts Department, these orders issue after consultation with Comptroller and Auditor General of India.

5. These orders will be applicable to those Central Civil Government employees who joined Government service on or after 1.1.2004 and are covered by National Pension System and will take effect from the same date i.e. 1.1_2004.
sd/-(Harjit Singh)Director (Pension Policy)
Click here to view original order
Posted by AMULYA KUMAR MISHRA at 5:33 AM