INDIAN POSTAL BANKING HAS LOTS OF SCOPE DUE TO CONNECTIVITY, SAYS COMMUNICATIONS MINISTER. 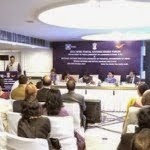 Even with widespread retail banking in place, India’s postal banking service has a large scope due to its connectivity, stressed Communications and IT Minister, Ravi Shankar Prasad on Wednesday (October 29).

Prasad was inaugurating the Postal Savings Banks Forum in New Delhi, which was organised by World Savings and Retail Banking Institute (WSBI) jointly with the National Savings Organisation (Ministry of Finance) and the Department of Posts.

The theme of the forum was “The Rising Force of Postal Banking in the Retail Banking Market”.

According to a statement by the Press Information Bureau of India, post offices hold 1.6 billion savings and deposit accounts globally, which is second to commercial banks that hold about 2.5 billion accounts.

Prasad said that postal banking transcended the rich and poor barrier, the biggest asset being the network of post offices throughout the country.

“The asset, ladies and gentlemen, to my understanding is connectivity. In India, as the Secretary Posts rightly pointed out, we have huge institutions spread all across different parts of India,” he said.

With a population exceeding 1.1 billion, a burgeoning middle class and better Internet access, India’s e-commerce potential is huge. Online retail sales are expected to surge to $76 billion by 2021, according to consultants Forrester, and the segment is growing at a much slower pace than other emerging markets, including China.

Prasad further said that the Indian Prime Minister had constituted a task force to deliberate on ideas and innovations for the Indian Postal Services.

“Yes, postal banking is a very exciting idea. I have always been supportive of it. Therefore, the Prime Minister himself has started a big task force headed by eminent officers in which Secretary Posts is also there, to come up with a very structured report outlining the new challenges, the new opportunities and the new way ahead for the Postal Services in India,”said Prasad.

Earlier this year, Modi promised to end “financial untouchability” with the Jan Dhan Yojana or Scheme for the People’s Wealth. The scheme would ensure the majority of households in India, of nearly 1.3 billion people, have a bank account within months.

The government said nearly 15 million people opened accounts at centres around the country on the first day of the programme.

The goal is to open 75 million accounts by January next year.
Posted by AMULYA KUMAR MISHRA at 6:14 AM