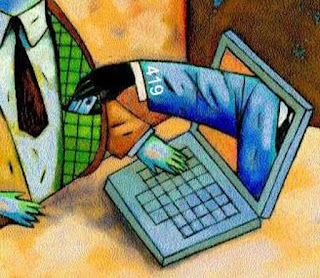 From 1 January 2016, no bank will accept currency notes with anything written on them: RBI." It is highly likely you have come across this message— shared by your well-intentioned, but gullible, friends. The message has been circulating on social media, and has been further spread via email and SMS. While this one is relatively less damaging, many others are not as innocuous. For instance, of late, some bank customers have been receiving calls from fraudsters posing as RBI officials in charge of 'account verification'. They are warned of account or card deactivation should they refuse to divulge their card or account-related sensitive information. Read on to decode such deceptive messages and avoid falling into their trap.

Curiously, the scribbled-notes-won't beaccepted hoax has been doing the rounds for over two years. While the date remains the same—1 January—the year is modified to make the message look current. "Because of writing on currency notes, the Indian government loses over Rs 2,000 crore every year... they cannot be detected during ATM transactions..." goes the elaborate hoax. While the RBI has indeed been asking banks and general public to avoid writing on notes as it "defaces them and reduces their life", it does not make them worthless. "They can be used everywhere... There is no terminal date for acceptance, so please disregard those rumours, they are not correct," RBI Governor Raghuram Rajan recently clarified.

Fraudsters often pose as RBI officials and create misleading email IDs and websites to swindle unsuspecting customers. Last year, the central bank had cautioned people against relying on 'All Bank Balance Enquiry No.' app, bearing the RBI logo, that was being shared through WhatsApp. "Members of public are... advised to use the application, if at all, at their own risk," the RBI warned. Similarly, in 2014, a fake RBI website was being promoted as a means to opening an 'RBI Savings Account'. The banking regulator, which does not offer such commercial banking services, warned people against acting on the message, pointing out that fraudsters could misuse their personal information to dupe them. There are also official-looking e-mails and SMSes from banks—even the 'RBI'—sent out to dupe people into revealing sensitive information pertaining to their bank accounts or credit cards. You need to guard against such frauds.

This recurring scam has enveloped many individuals. It has all the ingredients of a classic fraud and yet people, goaded by greed, fall prey to it. This is how the scam works: tricksters, posing as officials of the RBI, other banks or regulators, send 'intimations' of lucrative lottery or prize winnings to randomly chosen individuals. To convince the recipients of the authenticity of their claims, they send such messages through fake letters, emails and SMSes that carry forged signatures of senior executives of these organisations. The unsuspecting victims are initially asked to deposit nominal sums as transaction fees and taxes for obtaining the prize money. Demands for more money follow, citing procedural hassles. "After accumulating a sizeable amount in these accounts, the fraudsters withdraw or transfer the money abroad and vanish," says the central bank.

Insurance customers too have been at the receiving end of fraudsters' deceit. The scam is executed by frausters posing as Irdai (Insurance Regulatory and Development Authority) officials. In 2014, Irdai had alerted policyholders about tricksters contacting them on behalf of the regulator's Integrated Grievance Management System (IGMS) cell, to resolve their complaints. Policyholders were told that for resolving their grievance and releasing the due compensation, they would have to complete formalities that included payment of fee. Scamsters would also call up policyholders to 'inform' them that their money had been fraudulently transferred and they had to make some payment as part of the procedure to get their money back.

Many policyholders also gave into the temptation of getting a 'bonus' that Irdai was purportedly distributing out of funds invested by insurers. Dubious callers lured policyholders into purchasing insurance policies that would yield this supposed bonus after a few months. The bonus, of course, never came through.

Many others got talked into switching their policies to avail of a 'one-time offer' to replace their lossmaking policy with a better-performing one. "Irdai has found out that your current insurance policy is fetching poor returns. As one-time relief to you, we are allowing you to surrender your existing policy and to a better product. You just have to pay a nominal fee for this..." lied the fraudsters. They also made attempts to entice customers into buying new insurance cover in order to avail of maturity proceeds or bonus under their existing policy, again citing non-existent Irdai rules. Fraudsters also make calls to 'advise' the public to invest in insurance policies to avail of gifts, promotional offers and interest free loans.

Source : http://economictimes.indiatimes.com/
Posted by AMULYA KUMAR MISHRA at 4:50 AM