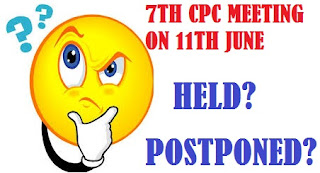 The most awaited meeting of Empowered Committee of Secretaries on Seventh Pay Commission's recommendation was to be held on 11th June, 2016 in the Chairmanship of Cabinet Secretaries.  Whether meeting held or postponed the mixed news are coming from media and union?  Zee News says that meeting was postponed for 17th June and the other hand the Sen Times says that the meeting held.  Here are the details about it:-

New Delhi: The meeting of the Empowered Group of Secretaries reviewing the 7th Pay Commission, to finalize the payout to the central government employees did not take place as scheduled earlier on Saturday.

The office of the Cabinet Secretary confirmed that the meeting did not take place on Saturday. It did not reveal either when would the secretaries panel meet again to give the final shape to the salaries of central government employees.

"The meeting is expected to take place on Tuesday, June 14", said V.P. Mishra, President, Indian Public Service Employment Federation. "When we met the Cabinet Secretary PK Sinha on June 3, he told us that we would be meeting on June 14", added Mishra confirming that the 7th Pay Commission report is said to be finalised soon. [Read more at: Zee News]

New Delhi: The Empowered Committee of Secretaries, who is processing the recommendations of the 7th Pay Commission met Saturday to discuss the issue of pay hike of central government employees and pensioners.

Sources told the Sen Times that Empowered Committee agreed to implement to hike pay to 48 lakh of central government employees and and 52 lakh pensioners from August 1,

However, the source declined to reveal details of the meeting.

The final decision on the matter has been taken in the meeting of the 7th Pay Commission review committe chaired by Cabinet Secretary P K Sinha in New Delhi on Saturday.

The meeting’s agenda also included adding final touches to the recommendations before they are handed to the Finance Minister Arun Jaitley.

7th Pay Commission award comes into effect with retrospective effect from January 1, 2016, salary packages of central government employees and pensioners will be impacted.

The Empowered Committee of Secretaries proposed to credit the arrears along with the revised pay.

The Secretaries’ group has recommended proposed a minimum salary at Rs 21,000 and the highest salary at Rs 2,70,000 for hiking salary around 30 per cent also recommended for doubling of existing rates of allowances and advances. [Read at The Sen Times]

The 7th Pay Commission committee met on Saturday to discuss the roll out plan and add final touches to the revised salary recommendations.

Revised, higher monthly salaries for lakhs of central government employees and pensioners may come into effect as soon as August 1, a report in The Financial Express said, quoting officials working closely with the 7th Pay Commission.

The final decision on the matter was supposed to have been taken in the April 11 meeting of the 7th Pay Commission committed chaired by Cabinet Secretary P K Sinha in New Delhi. The meeting's agenda also included adding final touches to the recommendations before they are handed to the Finance Ministry. The details of what transpired in the meeting on Saturday haven't been revealed yet.

When it comes into effect with retrospective effect from January 1, 2016, salary packages of 47 lakh central government employees and 52 lakh pensioners will be impacted.

On the other hand AIRF is agree with the Zee News:-

Internal meeting of group of secretaries which was scheduled to be held on 11.06.2016 has been cancelled. Meeting didn’t take place at all. Shri P.K. Sinha Cabinet Secretary is heading the committee of Group of Secretaries.

On the clarion call of the National Joint Council of Action (NJCA), against the retrograde recommendations of the VII CPC, 11-point Charter of demands of the Central Government employees as also non-settlement of long pending genuine demands of the Railwaymen, AIRF and its affiliates organized  huge demonstrations at all Zonal Headquarters of Indian Railways on 9 June 2016. On this occasion the employees of  Indian Railway participated in mass demonstrations with full enthusiasm with holding banners in  hand and  shouting  slogans for early redressal of their long pending genuine demands.
Posted by AMULYA KUMAR MISHRA at 7:20 AM