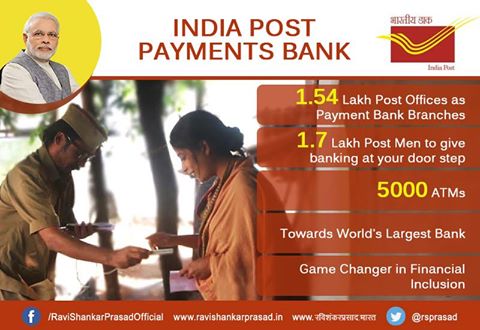 The total corpus of the payments bank is of Rs 800 crore, which will have Rs 400-crore equity and Rs 400-crore grant

India Post Payments Bank (IPPB) will be set up as a public limited company under the Department of Posts with 100 per cent government equity. The Cabinet approved a proposal in this respect on Wednesday.

The total corpus of the payments bank is of Rs 800 crore, which will have Rs 400-crore equity and Rs 400-crore grant.

Telecom Minister Ravi Shankar Prasad told reporters after the Cabinet meeting that 650 branches of the postal payments bank would be established in India, which will be linked to rural post offices.

India has 154,000 post offices, of which 139,000 are rural post offices. IPPB will obtain banking licence from the Reserve Bank of India (RBI) by March 2017 and by September 2017, all 650 branches of the postal payments bank would become operational.

Its services will be available across the country through these 650 payments bank branches, linked post offices and alternative channels, riding on modern technology including mobiles, ATMs and simple digital payments.

“This we had planned for three years, but now we will be doing it in a year,” said Prasad. He added that the payments bank, which will be run by a Chief Executive Officer, would be professionally managed and there would be a representation from various other government departments including the Department of Posts, Department of Expenditure, etc.

He said all ‘grameen dak sevaks’ in rural post offices would be given hand-held devices by March 2017.

“We are reinforcing it further. I have had discussion with my officers to give iPad and smartphones to postmen in urban post offices,” said Prasad.

At present, the core banking network of post offices is more than that of the country’s largest lender State Bank of India (SBI).

Source : http://www.business-standard.com/article/economy-policy/india-post-payments-bank-to-be-a-reality-116060101947_1.html
Posted by AMULYA KUMAR MISHRA at 6:57 AM