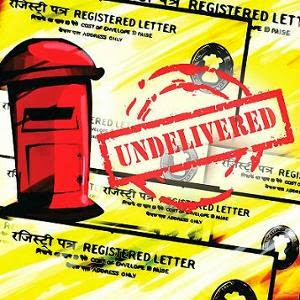 Justice S Tamilvanan, underscoring the importance of a registered post in litigations and other matters, said that when people pay a fee and affix sufficient postal stamp, the postal authorities or postmen must discharge their duties in a responsible manner. The postman should make it clear as to whether the registered letter was served on the addressee or refused by the addressee or no addressee was found in the given address, the judge said.

Passing orders on a matrimonial litigation, wherein a Chennai-based woman wanted her divorce proceedings to be transferred from a Puducherry court to a Chennai court, the judge said the woman's notice sent by registered post had been returned undelivered with a simple endorsement "unclaimed." Slamming the practice, Justice Tamilvanan said the court was of the view that the reason for the non-delivery of the notice had not been properly explained to the person who sent it.
"The endorsement 'not claimed' is required to be made in a responsible manner by the postman or the official of the postal department, so as to convey proper reason and to bring out the fact as to under what circumstances the registered letter could not be served on the addressee by the postman," the judge said.
In case the registered letter is delivered to a person other than the addressee, the postman must obtain clear endorsement and explain the relationship of the signatory who received the letter on behalf of the addressee, Justice Tamilvanan said.
Return of registered letters with a comment "unclaimed" or with some other improper endorsement would cause inconvenience to the general public and the person seeking justice through court of law, the judge said, adding: "Service of notice by registered post plays a vital role in deciding several cases."
He then directed the chief post-master general of Tamil Nadu to give suitable instructions to all postal department officials to follow the guidelines laid down by the court in this case.
Source : http://timesofindia.indiatimes.com
Posted by AMULYA KUMAR MISHRA at 11:18 PM