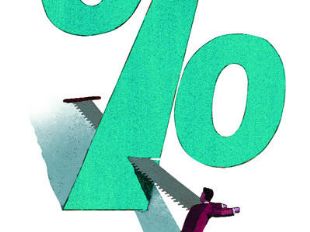 If you are disappointed by the recent cut in interest rates on small savings, get used to the feeling because a harsher cut is in store next year. This is because interest rates are linked to the yields of government securities in the previous calendar year.

The various small savings schemes offer interest rates that are 25-100 basis points more than the yield of government bonds with similar maturities. The mark-up varies from 100 bps for the Senior Citizen's Savings Scheme (SCSS), 50 bps for the 10-year National Savings Certificate (NSC), and 25 bps for others, including the all-time favourite Public Provident Fund (PPF).

The government bond yields were high in the first quarter of 2012, but fell after the RBI cut interest rates. For instance, the yield of the 10-year bond spiked to 8.7% in April 2012, later dropped to 8.2%, and has stayed below 8% in the past three months.

The RBI has cut the repo rate by 50 bps this year, but there is no certainty if this trend will continue. At the policy review meeting on 19 March, the RBI governor indicated that there was little room for further cuts. The central bank is concerned about the divergence between the Wholesale Price Index (WPI), which has softened to 6.84%, and the Consumer Price Index (CPI), which remains stubbornly high at 10.91%.

Even if the central bank pauses for some time and there is no further policy action during the year, investors should brace themselves for harsher cuts next year. Assuming that the 10-year bond yield stays put at 8%, the rate for the 10-year NSC will be scaled down by 30 basis points from 8.8% to 8.5%. By the same assumption, the PPF rate could recede by almost 45 basis points to 8.25% in 2014-15. 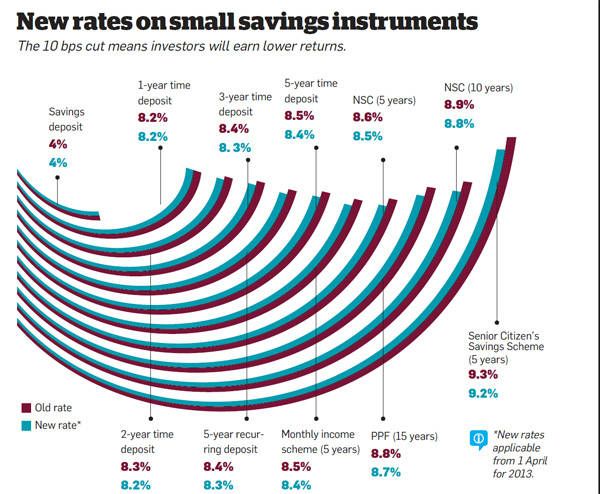 The new interest rates announced for the NSC, SCSS and term deposits are only for fresh investments. In other words, you can lock in at the current rates and enjoy the same rates till maturity. However, this does not apply to the PPF and the new rate announced every year applies to new as well as existing investments.
Despite the rate cuts, small savings are good bets for risk-averse investors who want to put money in government-backed instruments. The 9.2% offered by SCSS is lower than that given to senior citizens by most banks. However, the quarterly payment of interest is useful for retirees. The tax-free status of the PPF still makes it an attractive option, especially for those in the high income bracket.
Source : The Economic Times, 01 April, 2013
Posted by AMULYA KUMAR MISHRA at 8:35 AM