Returns on NPS funds only marginally better than EPF

NEW DELHI: National Pension Scheme (NPS) funds for government workers have not been able to beat the debt-based Employees' Provident Fund (EPF) by a significant margin in the past five years.

The five-year returns on the NPS fund managed by UTI Retirement Solutions, assuming that the investor was following a systematic investment plan ( SIP), work out to 8.78% while the Employees Provident Fund has yielded 8.62% during the same period. The calculation is based on the internal rate of return (IRR) of monthly contributions from April 2008 till March 2013.

"There cannot be a significant difference because the government allows only 15% of the corpus to be invested in equitie,"says Yogesh Agarwal, chairman of the Pension Fund Regulatory and Development Authority (PFRDA). The current allocation of the UTI managed scheme is not known but as on September 30, 2012 it had 8% of its corpus invested in stocks. 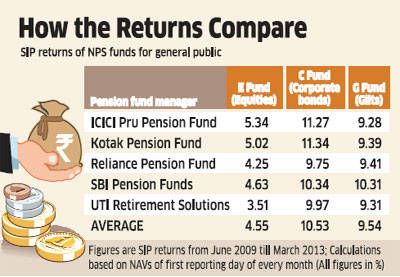 The PFRDA wants that government employees should also be allowed the same investment choices as other investors in the National Pension Scheme. The ordinary investor in the National Pension Scheme is allowed to define his asset allocation and can put up to 50% of his corpus in equity funds. He can also change his asset allocation or switch his pension fund manager once a year.

"Once the government makes the monthly contribution to the employee's National Pension Scheme account, its responsibility ends. It should not stipulate how that money should be invested," says Agarwal.

However, the equity funds of the five pensions fund managers for the general public have also performed poorly since their launch four years ago in May 2009 casting doubt on the theory that a greater exposure to equity could have driven up returns. The average fund has yielded 4.55%, which is marginally better than the 4.12% returns from SIPs in the Nifty over the same period.
Source : The Economic Times, 01 April, 2013
Posted by AMULYA KUMAR MISHRA at 8:33 AM