Under the able leadership of Com. M Krishnan, our beloved General Secretary, AIPEU, Group-C and Secretary General, NFPE, a relay hunger fast has been started by Kerala Circle JCA including FNPO from 01.04.2013 in front of the office of the Postmaster general, Central Region, Kerala protesting against closure of BOs, redeployment of Mail Overseer posts etc.
Conveying Red Salute, the AIPEU, Group-C, Keonjhar branch extends its moral support to the agitational programme conducted by the comrades of Kerala Circle and wish all round success.
The local electronic and print media has also published the news in support of the agitation by the postal workers. The following is the publication from from today's "The New Indian Express." 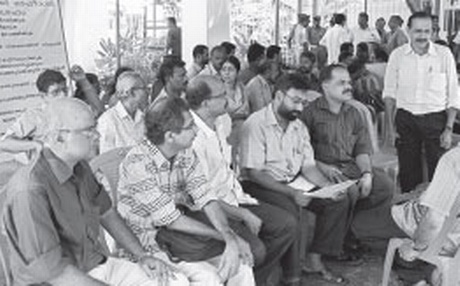 Demanding the withdrawal of many repressive measures, the Postal Department employees under various unions launched relay fast in front of the PMG office on Monday. They said that many revenue-garnering offices are being closed down.
The post offices are being shut down in the pretext of relocating it. The move could be justified if these post offices were garnering less revenue. But it is not. Besides, many posts are being cut down.
The authority should back out from such restraining measures. The Postal Department has decided to close down the two post offices which have been running successfully for the past several years, they said. The relay sathyagraha will continue till April 5.
M Krishnan, National Federation of Postal Employees, inaugurated the relay fast.
John Avokkaran, chairman, Joint Council Action presided over the meet.
Source : http://newindianexpress.com/cities/kochi/article1526242.ece
Posted by AMULYA KUMAR MISHRA at 6:45 AM