Central employees may have to dress in Khadi on friday 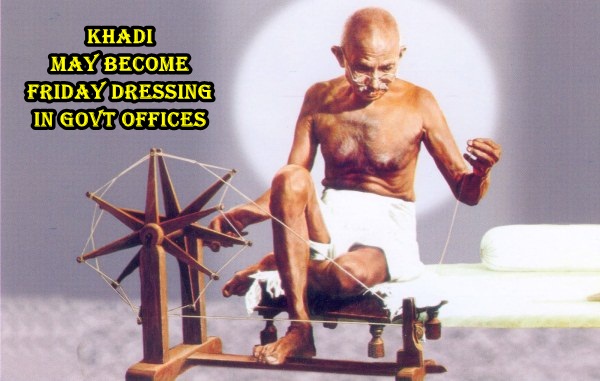 Friday dressing may have a new meaning for government employees - wearing khadi to work.

The government is considering a plea from the Khadi & Village Industries Commission to appeal to employees to wear clothes made from the hand-spun fabric at least once a week as part of a plan to boost khadi production and benefit small weavers across the country.

"We are discussing this with the government and we will make an appeal. Employees can wear it to work on just one day," KVIC chairman VK Saxena told TOI, when contacted. Sources in the government said the entire exercise would be voluntary but the idea is to increase sales. "Even if everyone buys one khadi garment, imagine the rise in sales," said an officer. The central government currently has around 35 lakh employees, which does not include the railways and defence personnel.

Officers, however, are not opposed to the plan. "I wear handloom saris most of the time. It's not a big deal," said an officer. Another officer described it as a "good idea" and added that a lot of officers were already wearing Fabindia shirts and will probably need to add one from Khadi to their wardrobe. Separately, KVIC is entering into tie ups with companies such as Fabindia and Raymond to retail high-end khadi at some outlets.

Prime Minister Narendra Modi has emerged as a brand ambassador of sorts for khadi urging people to buy. This has already provided a fillip to sales. In fact, boosting production is now a major challenge for KVIC, which has separately sought to push khadi for uniform in government schools, defence forces, railways and Air India.
However, the issue of Khadi Friday dressing for central government employees may trigger a debate in central government offices.
Source : Times of India
Posted by AMULYA KUMAR MISHRA at 3:13 PM