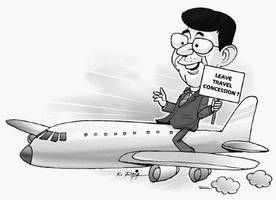 New Delhi: All non-entitled central government employees have been allowed to travel by air while availing Leave Travel Concession (LTC) with a condition that reimbursement in such cases shall be restricted to the fare of their entitled class of train or actual expense.


The Ministry of Personnel had recently eased norms for processing claims of LTC -- which allows grant of leave and ticket reimbursement to eligible central government employees to travel to their home towns and other places.

"Government employees not entitled to travel by air may travel by any airline. However, reimbursement in such cases shall be restricted to the fare of their entitled class of train, transport or actual expense, whichever is less," an order issued by the Ministry said.

The move comes after the government received a number of queries in this regard. In many cases, employees did not have railway station or good road network to their home towns and they had requested for permission to travel by air to save time, which was being denied, officials said.

A government servant may also apply for advance for himself or his family members 65 days before the proposed date of the outward journey and he or she would be required to produce the tickets within ten days of the withdrawal of advance, irrespective of the date of commencement of the journey, as per the new norms.

There are about 50 lakh central government employees.

All central government employees have been asked to share photos and interesting details of their holidays.

The DoPT has decided to put a limit of one month for verification of LTC claim after the LTC bill is submitted by government employee for settlement and final payment.

Source : http://zeenews.india.com/
Posted by AMULYA KUMAR MISHRA at 11:16 AM