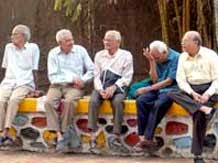 A proposal to increase the retirement age of government employees from 60 to 62 years came to Cabinet yesterday but a decision was deferred.

The government may make the announcement in the Prime Minister’s 15 August address, his last before elections in 2014.

The Ministry of Personnel, Public Grievances and Pensions has proposed an increase in retirement age of Government employees from 60 years to 62 years, top sources confirmed.2013-14 is considered an election year because of five assembly elections and general elections in May next year.

The move is meant to ease the financial burden on the Government in terms of its pension liabilities, sources said.

The retirement age of professors in all central universities was recently raised to 65 years.

D L Sachdev national secretary of All India Trade Union Congress said that his union was totally against increase of retirement age beyond 60. It will hurt the youth especially when the Government is doing nothing to create jobs for them, Sachdev said. Congress affiliated Indian National Trade Union Congress national president Sanjeeva Reddy said that his union had been demanding increase in retirement age to 62 years and would welcome it.

Minister for Personnel, Public Grievances and Pensions V Narayanaswami had ruled out increase in retirement age to a question in Parliament in the winter session this year. An official in the ministry when asked refused to speak about it.