If labour is going to wait for the Government and mainstream to invite them, they will be waiting for a long time. If labour is not involved, an important opportunity to shape and implement the present policies will be certainly missing. That’s why formation and functioning of union do matter.

Dear Comrades,
As per the decisions taken in the 9thFederal Council of NFPE, the first State Level Convention of All India Postal Casual, Part-time, Contingent & Contract Workers Federation(AIPCPCCWF) was organized successfully in the Recreation Club of CGMT, Bhubaneswar on 11.08.2013 under the president-ship of Com. R C Mishra, Circle Secretary, AIPEU, Group-C, Odisha & Vice-President, CHQ.

At the outset, the cause and importance of forming AIPCPCCWF was briefed by Com. R N Dhal, General Secretary, State CoC, NFPE & Circle Secretary, R – III along with the role of NFPE in working for the cause of such workers. He briefed the gathering the rules and regulations framed by Govt. of India for the welfare of the casual workers and expressed concern over the misinterpretation and incorrect implementation of such rulings by the administration to deprive the benefits to such workers and stressed that the proposed AIPCPCCWF will be the proper forum for negotiation of all the issues of the casual workers with the Government/ Department. 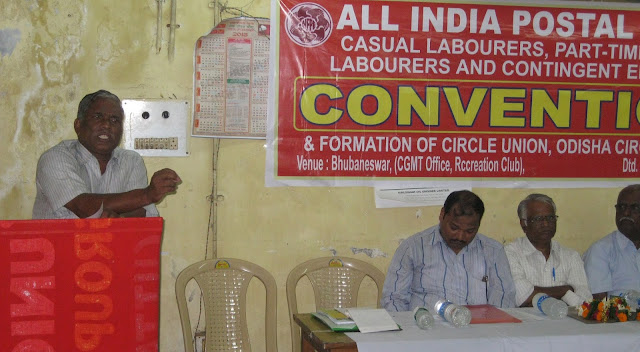 The meeting was inaugurated by Com. P Mohan, General Secretary, AIPCPCCWF who narrated the position of casual workers in different circles and the importance of forming AIPCPCCWF. No other Federation, except NFPE is thinking for such downtrodden workers – He said. Once this union is formed in each Circle and Division, it will certainly strengthen the moral courage of such exploited workers all over India and NFPE will take every effort to redress their grievances.

Addressing the Convention as Chief Guest, Com. Y Nagbhusanam, Working President, AIPCPCCWF, CHQ clearly explained the history behind formation of this union and the role of the then NFPTE and now NFPE for the cause of the casual workers. He described the steps to be taken with the help of NFPE unions in all Circle and Divisional level for initial formation of casual workers’ union. He suggested the present NFPE unions’ leadership at all levels to obtain the information from the Division/Circle heads on casual workers under RTI Act, 2005 which will ease the way for smooth enrollment. 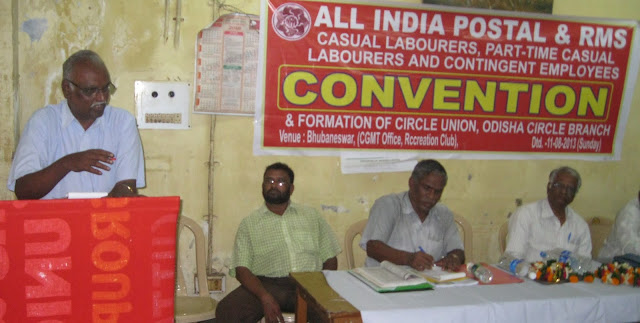 Bhubaneswar Division was attended by all its Divisional Secretaries namely, Com. Bruhaspati Samal, Secy, AIPEU, Gr.-C, Com. Sudhir Kumar Swain, Secy., AIPEU, Postman & MTS and Com. Ghanshyama Panda, Secy, AIPEU GDS ( NFPE ) along with other representatives. Addressing the convention, Com. B Samal brought into light the technical difficulties now prevailing in Bhubaneswar Division in particular and in other Divisions of Odisha Circle in general to enroll such casual workers under the proposed AIPCPCCWF who are though working in almost all the post offices but without any valid appointment and thus having no name and signature anywhere in office records. Most of them are contingent paid workers like water carriers, scavengers, sweepers or care-takers who are being paid through the concerned Postmasters. The admissible contingent amount is being drawn in favour of the Postmasters of respective offices and the amount is being paid without any record. Though these workers have played a major role in the present transformation of India Post under “look & feel good” concept, they are seriously exploited by the administration. While they are working for more than 8 hours, their payments through the Postmasters are restricted to a few hours only. In most of the cases, especially the care-takers are working through out the clock but without any proportionate payment. Com. Samal requested the CHQ leadership of AIPCPCCWF to find out ways and means how to enroll the names of such workers first in the official records so that the proposed forum will function effectively. 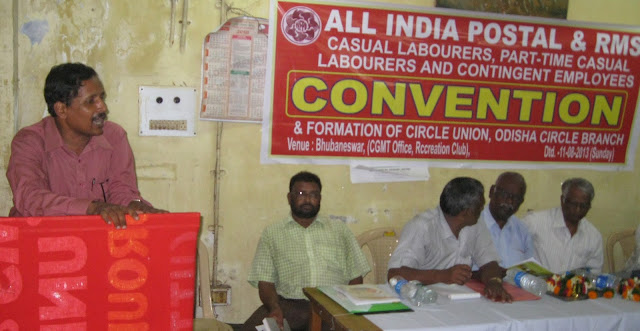 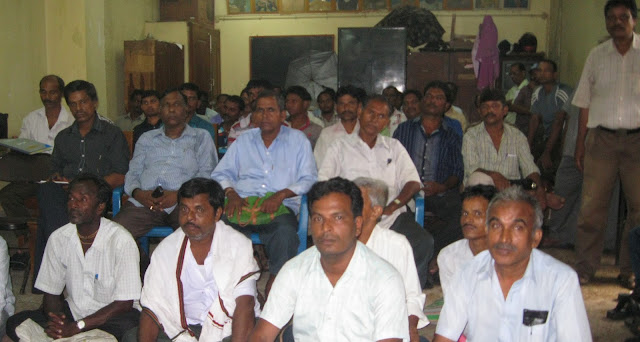 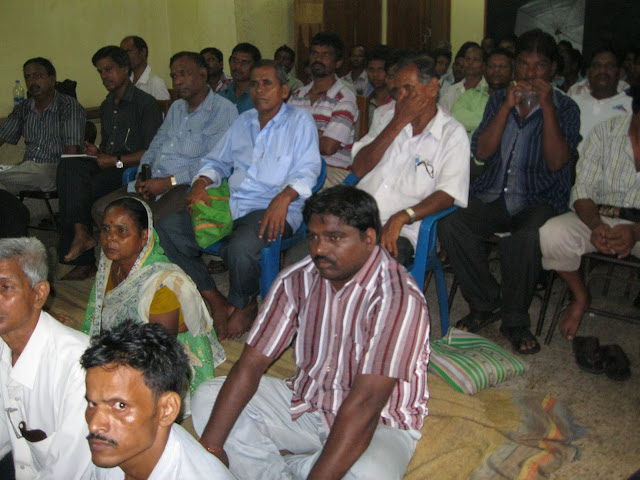 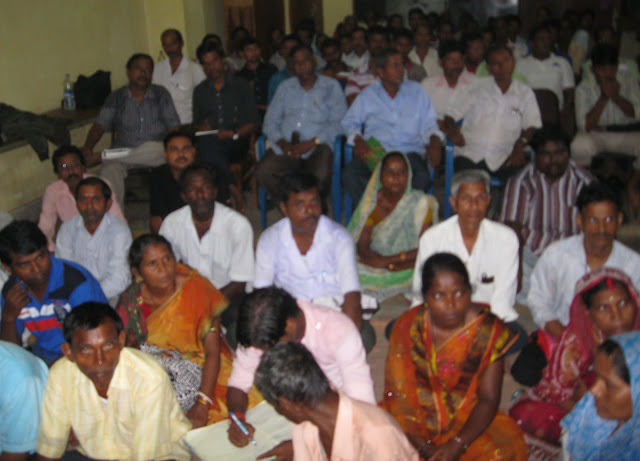 The convention received a very good response with participation of hundreds of part-time and full-time casual workers from different Postal and RMS Divisions of Odisha Circle. In the end, the Circle Body was formed unanimously as follows. 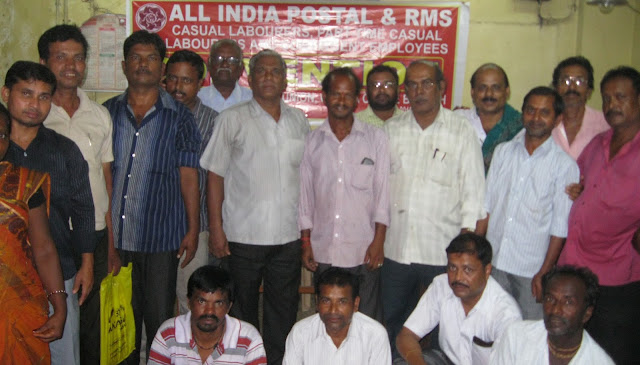 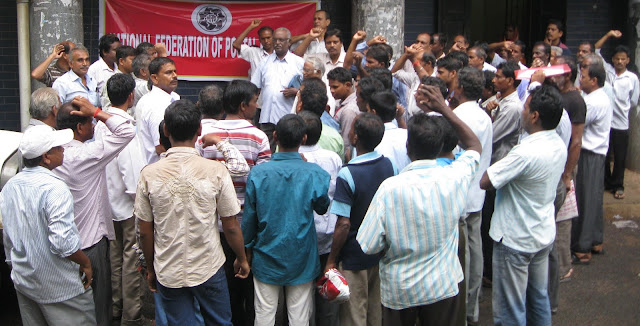 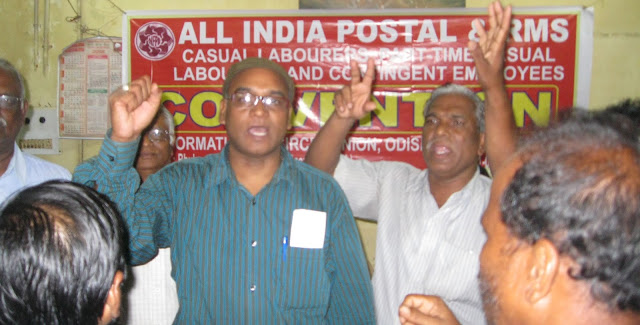 Posted by AMULYA KUMAR MISHRA at 1:28 AM