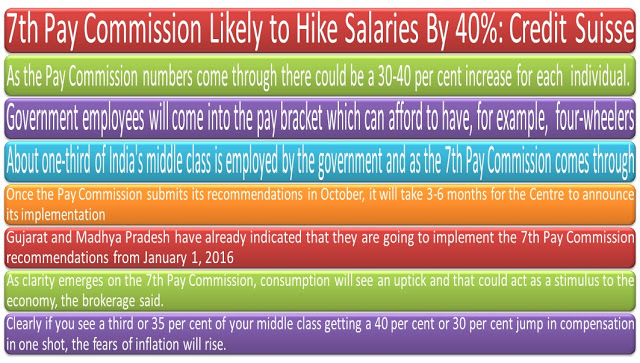 The 7th Pay Commission is likely to raise the salaries of government employees by up to 40 per cent, said Neelkanth Mishra, India equity strategist of Credit Suisse. The Pay Commission will submit its recommendations in October and it will be implemented by next year.

"As the Pay Commission numbers come through there could be a 30-40 per cent increase for each individual. It won't be as big as last time because it was driven by a lot of arrears but definitely a large number of government employees will come into the pay bracket which can afford to have, for example, four-wheelers," he said in an interview with NDTV. (Watch the full interview)

Credit Suisse says about one-third of India's middle class is employed by the government and as the 7th Pay Commission comes through, there will be an improvement in discretionary spending.

"In Tier 3, Tier 4 towns where government employees are 50-60 per cent of the middle class, it is very likely that real estate markets will take off again," Mr Mishra said.

Once the Pay Commission submits its recommendations in October, it will take 3-6 months for the Centre and the states to announce its implementation, Credit Suisse said.

Gujarat and Madhya Pradesh have already indicated that they are going to implement the 7th Pay Commission recommendations from January 1, 2016, he said.

As clarity emerges on the 7th Pay Commission, consumption will see an uptick and that could act as a stimulus to the economy, the brokerage said.

However, Mr Mishra struck a note of caution. "Clearly if you see a third or 35 per cent of your middle class getting a 40 per cent or 30 per cent jump in compensation in one shot, the fears of inflation will rise." Expectations of rate cuts can get pushed out and some possible fiscal pressures can emerge, he warned.

Source: http://profit.ndtv.com/news/life-and-careers/article-7th-pay-commission-likely-to-hike-salaries-by-40-credit-suisse-1201386
Posted by AMULYA KUMAR MISHRA at 1:23 AM